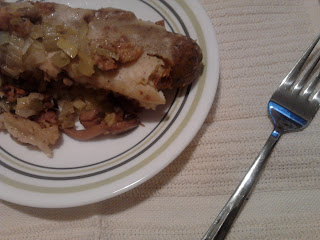 Again with the CSA box. I received leeks, and this title jumped out at me when I was searching for something to make with those leeks. I’ve never heard of this dish, but it sounds like a yummy eggy brunch dish. Sausage, leeks, eggs and deliciousness. Yum. I totally expected there to be cheese based on the rest of the recipe. I even went so far as to put it out on the counter as I was prepping. But there’s no cheese! I might serve mine with optional cheese on top. I also didn’t wrap the “bacon” around my sausages. I originally intended to make tofu bacon and wrap it around, but I thought the mushroom “bacon” bits would make more sense here as the sausages were already chock-full of protein. So, I went with the veggies instead. Of course, you can’t really “wrap” bits around sausage, so I just threw them on top of the sausages. 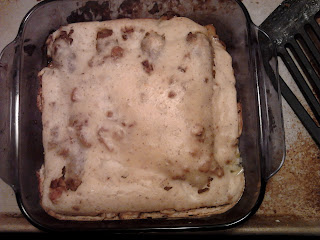 Directions
Preheat oven to 425°. Rub oil into bottom and sides of 8 x8 baking dish, and scatter finely chopped leeks on top.  Arrange sausages on top of leeks and bake until bacon and sausage begin to brown, about 10 minutes.

When sausages are ready pour batter over sausage and place back in oven until well browned and puffy about 25-35 minutes, serve immediately topped with optional fried eggs.

The Results
This was good. Not at all what I was expecting, but good. I was expecting more egginess, but I had opted out of the fried eggs on top so it was more bready and sausagey. I LOVED the leeks in this. They were perfect. I think, were I to make it again, though, I would push some of the batter down into the leeks to tie the whole concoction together. As is, the vegetarian version ends up with a bready layer on top. Maybe this is because they aren’t as greasy as the meat version so the batter doesn’t slide off? I’m not sure. But it ended up more of a layered dish. After several bites that way, I mixed mine up and liked it better like that. This dish is a traditional English dish, apparently. I really like the premise and will definitely work on fine-tuning it in the future. Yum.

What are you having for Sunday Brunch, Breakfast or Lunch?

This post is shared at·Sundays at One Food Club, Just Something I Whipped Up,·My Meatless Mondays, Penny Worthy Project·and·Potluck Sunday.