When I was taking inventory on my pantry for Get Real, I uncovered a package of Lemon Poppyseed Muffin mix. Now, I’ve never been a food snob by any means. I’d eat store-bought muffins and make cakes and treats from mixes, no problem. There’s a special place in my heart for those tiny little mini blueberry muffins that you make from a bag mix. We used to make them all the time when I was a kid and I loved them. But, since having kids, I’ve been more aware of labels.

The muffin mix was something we grabbed in the store out of habit over a year ago. When we got it home and read the label, we realized we didn’t want to feed it to our toddler or to me (I was nursing a newborn at the time). But, I’m not one to throw things away, so there it sat in the back of my pantry.

When I realized I had these delicious homemade Lemon Poppyseed Muffins scheduled to bake, I decided it was kismet. I dug out that bag o’ instant muffins and decided to do a little comparison between the homemade and the instant muffins. First up, in the comparison the ingredients. The instant muffins are of the “just add milk” variety. So, all I needed for those was the package and the milk. I used organic whole milk, which seems a little silly considering what’s on the label, but organic is all I keep on-hand. As for the label ingredients, I think my favorites include the aluminum-filled baking soda and the anti-caking agents for the powdered eggs.

Now, as for the mixing part, I had a lot more fun mixing up the homemade muffins with Bug, but I’ll admit the instant muffins were ridiculously easy. I cut the bag, Bug poured the contents in a bowl. We poured the milk in her little whale measuring cup and she mixed it up all by herself. Definitely simple. I let bug pour all scoop all of our muffin batter into the muffin tins. The instant variety was lumpier, but it still looked okay at that point. It’s when they came out of the oven that you could really tell the difference. And the difference was pretty crazy. 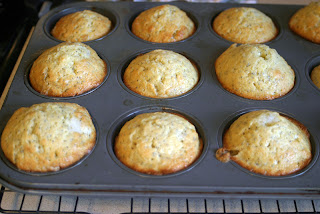 The homemade muffins looked like the muffins I’m used to now. Fluffy, with rounded but lumpy tops. Yes, they’re all different sizes, but hey, there was a toddler at the helm for the scooping. They’re looking pretty good, considering. And then came the instant muffins. They actually baked around the same amount of time, but at a higher temperature and yet they came out pale, with smooth tops and looking a little sickly. But, I still assumed at this point that the muffins would be tasty in spite of their other faults. Here was my mistake: I tasted the homemade muffins first. If you’re trying this at home, I’d highly recommend doing the taste test the other way around. You may not know what you’re missing for at least a blissful few minutes. 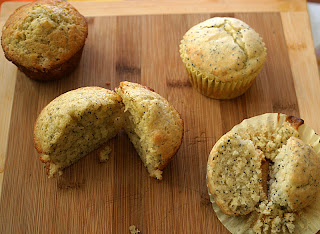 As for appearance and texture, the homemade muffins, (on the left, without papers) were a nice golden yellow from the lemon zest, but not that creepy neon yellow of some store-bought lemon items. The cake was fluffy and moist and the poppy seeds were speckled evenly throughout. The instant muffins (on the right, in papers) were lighter and without a yellow cast at all. This was preferable to neon yellow, so I was OK with that, but the texture was not terribly fluffy they appeared more like the consistency of boxed white cake mix.

So, then we tasted them. The homemade version was incredibly lemony, which is awesome since the lemon consists of just 2 tablespoons of lemon zest (about 1 lemon) for a batch of 12 muffins. That zest really packs a punch. The muffins held the right amount of sweetness and the cake was moist and fluffy without being soggy. The instant version had a hint of lemon juice flavor, but the dominant flavor was something vaguely metallic that, after taking a bite, I remembered as something I was fond of in those mini blueberry muffins. Now it just creeps me out. The texture was OK, but not nearly as hearty and fulfilling as the homemade muffins. Bug’s criticism was the best. She spit the instant muffin back in her little toddler bowl and then frantically wiped at her tongue to get the crumbs off. I took a photo, but I decided not to gross anyone out with pre-chewed toddler food. Her little sister, Goose, was less discerning, she ate both versions happily. She did seem to gobble the homemade muffins more quickly than the instant variety.

I was honestly a little surprised that I didn’t like the instant muffins at all, I thought I’d probably like my homemade version better, but still appreciate the convenience of the instant and think they tasted pretty good, considering. I didn’t think that at all, I thought they were gross by comparison and I wouldn’t make them again. The good news is, I’ll be much happier in my whole food journey with the prospect of better flavors on the horizon.