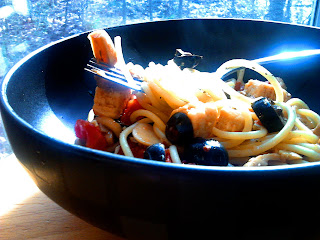 OK, I know, seriously, I need to diversify. But Stolen Moments’ recipe list just calls to me. I promise next week I’ll bring you recipes from more great bloggers. After that, I make no promises.

On to the recipe…chicken pasta puttanesca. I love Puttanesca. I’ve never had it with chicken, or “chicken.” I’ve also never had it with capers. This recipe calls for capers. I’m not fond of capers. If you are, leave them in by all means. Instead, I’m substituting a caper substitute I made up by looking around at what other people substitute for capers. Most called for green olives or brined things. So I brined some finely diced mushrooms with a mix of olive oil, vinegar, fresh ground peppercorn medley and bacon salt. I was going to do olives, but I thought maybe the mushrooms would turn out looking more capery. Yes, I’m aware that’s not a real word. I’m OK with it. So, these “capers” are so good. They taste like salty, chewy, vinegary, bacony bits. So good. Yes, I’m also aware I made up a word or two there. And yes, I did receive a degree in journalism through a renowned journalism school. I’m still OK with it.

Capers are also kind of expensive, so, even if you like them, you may want to use a substitute to keep things “on the cheap.”

Return chicken to the skillet. Add the diced tomatoes and their liquid. Bring to a boil, reduce heat, cover and simmer for 20 minutes. Stir in the Italian seasoning. Toss half the sauce with up to one pund fully cooked and drained pasta. Freeze the remaining half for another meal.

Original recipe is from Kate at Stolen Moments Cooking.The Results
Holy moly. Wow. This sauce’s flavor packs a punch. I made a half-recipe instead of freezing half and that was still a lot of pasta! And it was delicious. As for my “capers,” they were good straight out of the fridge, but they sort of got swallowed up in the sauce after that. I suggest sauteing them until a bit crispy first to seal in their distinct flavor. I tried that after I finished my first bowl, added some to my, ahem, next bowl, and pow! They were much more capery. Or at least distinguishable among all the other strong flavors. I will definitely be putting this one in the to-make-again list. Yum. Delicious and simple.This post is shared at Presto Pasta Nights.