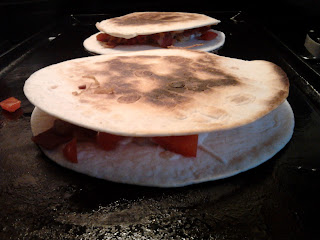 This original recipe is posted at http://stolenmomentscooking.com/chicken-ranch-quesadillas/

Ranch dressing
8 tortillas
Butter or margarine, for cooking
Cook the bacon in a skillet until desired crispness, remove from pan. Add butter to pan, add the sliced green peppers and onions to the skillet and cook for about 3 minutes, until crisp-tender. Add chicken to heat through and combine mixture with bacon.Add a handful of cheese to the tops to 4 tortillas. Top each with chicken, bacon, onion and peppers mixture, then lightly drizzle some ranch dressing over that.  Add the remaining cheese on top of each pile.Top each tortilla with the remaining four tortillas. Spray griddle with non-stick spray or melt a little butter or margarine in a large skillet and cook the tortilla stacks one (or two with griddle)  at a time over medium heat, about 4-5 minutes per side, until golden brown and cheese is melted. Add more butter or margarine to the skillet as needed.
Cut each quesadilla into wedges and serve with extra ranch for dipping, if desired.The Results
I have had mixed results with fake bacon. Real bacon is the one meat I would continue to eat based on taste and the fake stuff just doesn’t compare. But, I managed to get the bacon super crispy this time and, with the ranch and cheese and other strong ingredients, the fake bacon complements this quesadilla and doesn’t (often) make me think how it would be better with the real stuff. I know, I know, I’m a bad vegetarian. But, at least I’m honest. I made my own ranch dressing because I don’t ever have ranch dressing in my pantry. This could also be a good vegan-recipe if you substituted out the cheese, butter and ranch for vegan-substitute versions. Here is the ranch dressing recipe, which could also be made with vegan sour cream. I’m not even sure they make vegan ranch dressing. These are pretty tasty and very easy to make. I also added about a Tbsp. of my husband’s homemade taco seasoning to the filling to spice it up a bit. I only made up 2 of them, and I’m pretty sure the rest of the filling will make more than 2 more quesadillas (the recipe says it makes 4). I like to make only what we will immediately eat and then store the filling and other ingredients to be compiled and cooked later. If you cook them and store them, the tortillas tend to get soggy and that makes for a yucky quesadilla. I had about 3 cups of filling left, so I imagine the total will be more like 6-8 quesadillas with my 6-inch tortillas. Perhaps the original recipe intended use of the larger burrito tortillas.

Mix all ingredients. This can be altered to taste, I reduced the dill from the standard recipe because I don’t care much for dill.