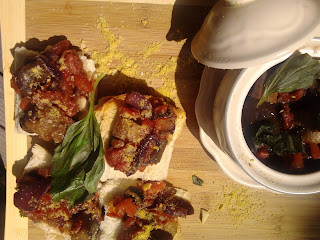 Don't you just love rediscovering old cookbooks? When I went to make the vegan version of Frugal Gourmet's Spaghetti Frittata Recipe I was pretty sure I remembered the recipe by heart. But, I wanted to link to the book and make sure I got the proportions right for the conversion of the recipe. So, of course, I thumbed through the rest of the book while I was there. I found this delicious-sounding eggplant caponata recipe. I don't think I've ever had eggplant caponata, but it sounds like a bruschetta with (BONUS) eggplants in it. Yum, right? But, bummer, it has anchovies in it. So, I definitely have to make my own. Yum! I replaced the anchovies with miso paste (for the briny flavor) and ended up making several other alterations. I adjusted the onion to red (from yellow) and increased the amount (because I'm allergic to the celery the original recipe calls for. I also switched the wine vinegar to balsamic. Mainly because I love balsamic, but also because I had it in my pantry (and had no wine vinegar).

I was also able to restrain myself and can some of the caponata for later with a simple water-bath canning method. So I get to enjoy this later in the year, too. Yum! 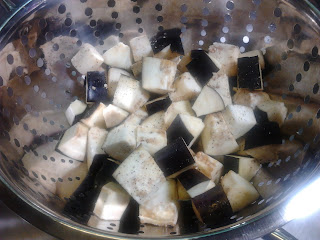 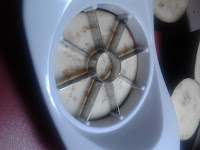 I think I came up with a pretty ingenious way to cube my eggplant, if I do say so myself. First, slice the eggplant into 1-inch thick rounds. Then, if you have an apple slicer (which if you're a mom, you sooo should if you don't yet), just slap that baby over the eggplant rounds and make little triangleish "cubes" and one circle. Yeah, they aren't perfect little cubes, but they are about the right size. And hey, it's rustic.

After you've cubed the eggplant in whatever method you choose, throw the pieces in a colander and dust them with kosher salt. 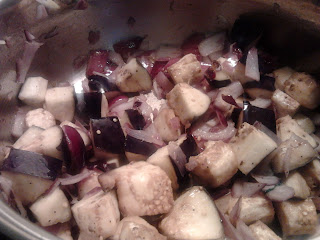 Meanwhile, saute the onion in a little olive oil for about 15 minutes. Set aside. In the same pan, saute the drained eggplant for about 10 minutes in a little oil. Place these all in a heavy kettle (at least 1 quart, preferably 2 quart to prevent crowding). I actually used this kettle to saute the veggies so I wouldn't dirty an extra pan.

We had ours on toasted bread pieces (like bruschetta), but it would also be great with crackers or even on pasta. We also dusted it with a little "parmesan" (see Cheeseburger Recipe).

The Results
After I tasted it, I regretted canning so much of it. 🙂 It is so incredibly tasty I'm not sure how long it'll stay in those jars. If you like eggplant, definitely make this. But even if you don't, give it a try, these eggplants aren't overpowering. You really taste the smokiness and the tomatoes and the briny "anchovies" and olives. Yum.

This post is shared with What's for Lunch Wednesday and Muffin Tin Monday.

Kristi Arnold is a former newspaper reporter and editor who is now a gluten-free vegetarian(ish) mom married to Mr. Meaty, a "normal" omnivore. Helping moms introduce family-friendly meatless meals into their lifestyle with ease.

VeggieConverter is all about life with our blended-eater family: 1 veggie/gluten-free mama + 1 meaty dad + 2 undecided kids converting traditional favorites into (mostly) vegetarian meals the entire family can enjoy together!

More about Kristi and VeggieConverter Check out my new cookbook!